IPRadio (ImmaterialRadion) is an initiative to explore the Nordic Intellectual Property (IP) field through discussions and interviews with interesting people with knowledge and experience from work and research in IP law.

The first test was made in June 2019 i collaboration with IPR University Center in Helsinki and their Summer School.

You can find the sound clips from the IPR Summer School at thotalmedia.com. 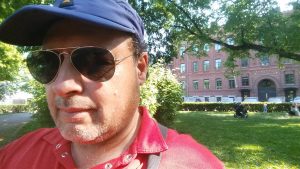 Henrik Thorson, the producer of IPRadio is a former media journalist (productions for YLE, Finland) and also an actor, who recently finished his law studies at the University of Stockholm in order to launch a “second career” in the field of law.

He is based in both Sweden (Stockholm/Filipstad) and Finland (Helsinki/Vasa).

Leena Ballard, Senior Legal Officer at WIPO Arbitration and Mediation Center talked about how alternative dispute resolution (mediation och arbitration) has grown in use when it comes to IP-matters. She presented the system especially designed for domain names called UDPR (Uniform Domain Name Dispute Resolution Policy). This system will celebrate its 20th anniversary in October of 2019 with more than 44 000 cases have been processed.

The test of a conflicting domain name is done in three steps: if they are identical or confusingly similar, if the holder has some right to use the name or a legitimate interest and the question of the name being registered or used in bad faith (the UDPR rules 3b ix).

Read about the lecture here.

We use cookies to ensure that we give you the best experience on our website. If you continue to use this site we will assume that you are happy with it.Ok